Music Skills for Toddlers and Older - High and Low

To teach your toddler, preschooler, Kindergartner, or Elementary Student high and low, you will first have to make sure you too, understand high and low. Again, this is not tough, but if you are also new to music, it is easy to get caught up in the volume levels and confuse volume highs and lows with tonal highs and lows.  This can all be done in one long string of activities or it can be broken into shorter sections (shorter sections surrounding each activity will most likely work best for most students).  If you break it up, you'll just need to start each new activity with a reminder of previous activities to clearly connect the activities together for your child or children.

High is the sound a flute (or its even higher cousin, the piccolo) makes.  Think of the keys on the right hand side of the piano, canaries and whistles.  These are high sounds.

Low is the sound of a Bassoon or Tuba.  These are the sounds made by the keys on the left hand side of the keyboard, a big bass drum and the thumping from the party next door that has just gone on too long.  This is the bass.

If you read music, the high notes are actually written higher on the staff than the low notes.


Start by watching "The Soundtrack" from Fantasia 1940.  Not only does the narrator actually refer to the bassoon as low, but the vertical line is used in representing "low" and "high" as the sounds move up the scale from low to high, so too does the concentration of vibrations on the animated soundtrack.

Watch again and while you do, move your bodies higher for high sounds and lower for low sounds.  Stand on your tip toes during the very highest sounds and squat way down close to the floor for the very lowest sounds.

Try doing the same activity with a piece of music you both enjoy (suggestions for music with good "highs and lows" later). 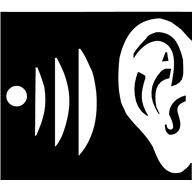 Now, do some science.  You can do both the string and pipe activities or only one or the other to get the idea across.  You'll need a drum (toy drums are just fine), pipes and a string or rubber band that is stretched tightly around something.

Begin with the drum.  Explain that sound comes from the air wiggling just right so that part of the inside of your ear begins to wiggle with the air.  Now, show how making sounds requires that the drum's membrane jiggles.  Place a Lego on the center of the drum and tap the edge lightly while you watch the Lego make corresponding bounces.  If you are using speakers, you'll have to remove the screen so your child can see the movement of the inner portion while you play something on the stereo.  Let your child play with this for a little while. 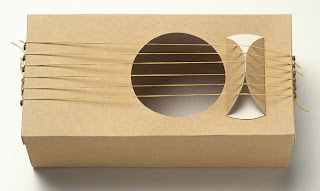 The simplest way to introduce vibrating high's and lows, is to stretch a rubber band around a board tightly.  This requires a board, a rubber band and either two small legos, wadded and rolled paper, or sticks to lift the rubber band away from the board.  You can also create a homemade guitar (like the one pictured here) fairly simply. You really only need one "string" though, and for the sake of simplicity, it is easier with small children if you have only one string.

Press down on the rubber band to make shorter or longer sections of vibrating "string".  "Play" the string by plucking it as you would a guitar string.  As you press on the rubber band in order to make it "shorter", listen carefully to how the sound changes with the length of the vibrating portion of the rubber band.  If you have a piano, guitar or other stringed instrument, look at it together and determine which strings make high sounds and which make lower sounds.  Can your child begin to see a pattern?  (Shorter strings make higher sounds than their longer counterparts)

In addition to strings, you can use air columns.  To do this, find some pipes of different lengths.  These can be from a toy xylophone where the pipes are removable, from a wind chime, or you can use PVC pipe you've cut.  Make sure one pipe is long and one is obviously shorter and they are both of the same diameter.   Play the pipes by holding onto the long portion of the pipe and banging one open end of the pipe against the palm of your hand.  Let your child give it a try.  Play both pipes together and listen carefully.  Can the child/children identify which pipe makes a high sound and which pipe makes a low sound? (again, higher = shorter)  If you know how to "buzz" through the pipe, do this too.  I can almost guarantee everyone with get a few chuckles out of some pipe "buzzing".  If you happen to have a slide whistle around, play with it and the sounds it makes too.

If you did the activity with "strings" as well as the one with pipes, connect the two activities.  Is the relationship of short to high and long to low the same with both?  (yes).  Add more pipes into the mix and let them experiment with different lengths.  On another day, give them pipes with different diameters if you wish and let them experiment with how this changes the sound too.

If you regularly reintroduce high and low by doing high/low "dancing" to a number of different songs, you'll find your budding musician, getting better and better at identifying high and low.  If you are in a classroom setting or are trying to teach music as part of your home school curricula, you might make this a brain break and simply have a CD ready with multiple songs on it that will work for high/low dancing.  Some songs that work nicely include:


For a "gourmet" variation on high/low dancing, you can give each child a balloon to hold.  Have the children show how "high" the music is, by letting the ribbon out and allowing the balloon to go higher, or by reeling in the balloon for lower sounds.

Another gourmet version for after dark (or in a room where all or most of the light can be blotted out) do the activity in the dark with glow sticks.  The higher the sounds the higher the glow sticks.

You can also try high/low coloring.  Give each kid a few "sentence strips" or long, narrow sheets of paper and have them "draw" a song by representing how high or low the sounds they are hearing are  by drawing one continuous wavy line.  You'll want to show them what you mean by doing this on the board once (or on a paper you do while they watch if you are at home and do not have a big enough board like myself).


Like I said, unless you have a highly interested child on your hands, it is likely that you'll want to break this up into a whole "unit" of study and spend some time over a month or so doing each activity (and redoing the listening activities) so your kid/kids can fully absorb high and low into their being without losing interest.  Whatever you do, make it fun and relax.  They are still young.

For Skill Numbers One and Two Click on Fast and Slow  or  Loud and Soft.

Thanks for your comments!

A Little About the Author