The Best Kinds of Toys 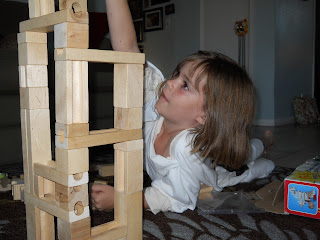 Do you remember when Legos came as a box of blocks and you had to figure out what to build with them and dress up clothes were just Grannies old clothes?  I do.  I'm sorry that for many kids those days are gone.  Now, when toys tell us exactly what they are for, kids are offered fewer chances to explore, invent and experiment all on their own.  Parents, however, don't have to find it difficult to encourage active and imaginative play in their primary-aged kids.

As you consider options for Christmas gifts in these last days before the actual holiday comes along, consider getting that plain old box of Legos that aren't packaged as anything in particular, those blocks that when put together create a really cool marble run (above) and the dolls that don't emulate a specific character already created, but can become whomever the child needs the doll to be at any given moment.  So many toys kids are given these days are "passive toys" - the best example of which is the TV or movies that go into the player.  Passive toys allow you just to sit back and be entertained.

However, active toys are the classics that somehow - never get old.  These are the great toys that require some imagination, manipulation, problem solving - even a little trial and error.  Remember erector sets?  Old-fashioned blocks?  The cardboard box mom and dad let you have when they needed to buy that new appliance?

Active toys are the velveteen rabbits of the toy crowd on Christmas Day.  They may not elicit the same squeals of delight the latest fad will bring, but in a few weeks when all the other toys have already shown off all their "tricks" it is the active toys children find truly engaging and special.

Dress up clothes that are made specifically to look like the latest princess are a lot of fun - for about five minutes.  A more generic "princess" dress lasts a lot longer because in it, the wearer can be any princess - including one of her own making, modern or ancient however the mood strikes her.  A Tunic with the right accessories can become the underpinning for a knight in shining armor (add a piece of cardboard cut out in the shape of a shield and a stick) OR a pirate's shirt (just add eye patch and hook).

Any kind of block or building that is not made in such a way that the child can only really build one item, are a GREAT gift for boys and girls (please don't make the mistake of believing girls don't like these toys too.)

Imaginary kitchen toys that are the "ingredients" for making other things are also spectacular.  A box of play french fries just won't go as far as a box with a couple of toy potatoes that can be "cut" into pieces and used for making french fries, mashed potatoes or stew.

Dolls are wonderful toys - again, when the doll is allowed to take on the persona the child needs it to take on at any given moment.  My daughter has an Ariel doll, a Rapunzel  and a couple of Tinker Bells - in different sizes.  The one she plays with most though is one of my old dolls that doesn't look like anybody in particular (except somewhat like I did as a child).

I think you probably get the idea.  Go ahead, buy that fashionable toy your child has been begging to have because all her friends have it - if you want, I'm just suggesting you also get a box of blocks to go with it.

Posted by Balance is Best at 7:45 PM No comments: Links to this post

A Little About the Author